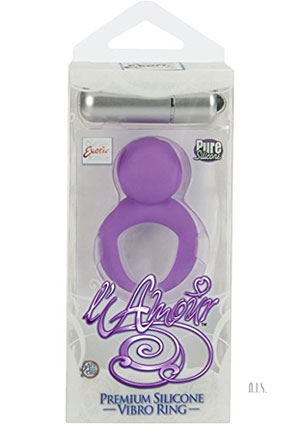 Hopefully by now we’ve reviewed enough vibrating cock rings that you’re all aware of how much they can jazz up a lovemaking session whether you have penis performance problems or not. However, if you do struggle with mild erectile dysfunction or premature ejaculation then the new L’Amour Vibro Ring might interest you more than the others.

I’ve put the L’Amour ring on both while soft and erect, and it requires a bit of lube to accomplish it while erect. While soft, lube makes things easier but it’s not impossible to get it on without it. Mind you, that’s just an over-the-penis fitting, because there’s no chance I could get my whole package to fit in it. A quick word to the wise here too; stay away from silicone-based lubes. I know it sounds illogical, but silicone lubricants can damage silicone toys.

The ring feels comfortable to wear and provides a lot more restriction than I expected since it’s tighter than I’m used to. Without a doubt it enlarges and strengthens my erection, and it squeezes enough to not only delay ejaculation but even to hamper it when it’s time to let go. I actually have to remove the ring just to be able to finish completely. It’s a small price to pay when I’m trying to get my wife off multiple times in one ride though.

One of the greatest things about this fake pussy is that it’s waterproof. Bath and pool fun aside, this means it doesn’t take any special attention when it’s time to clean it. Soap and warm water or a commercial toy cleaner will do the trick in no time. But if for some reason you find the need to sanitize the toy further, you can remove the vibrating bullet and drop the ring into your dishwasher or give it a short bath in boiling water. That sort of heat would damage the vibrator though, so don’t forget to remove it first if you do that.

I’m pleased with this toy and highly suggest it to any man who is looking for a bit more control than the average soft-material rings give. It takes slightly more effort to put the L’Amour Vibro Ring on, but it’s well worth the effort.

I’m so used to TPE rings that this toy’s silicone impresses me as much as anything. It’s odorless, uber soft, and not prone to grabbing hair or blanket fuzzies like some silicones are. Niiice!

The vibrator feels very nice, but not the sort of stimulation that can please me all on its own. On the highest speed, the vibrations are enough to *almost* get me off even with the silicone material muting them down, but the ball-like design gets in the way. I get to the point where I need some real direct clit stimulation, and no matter how much I grind against it it’s just not enough. The bullet’s ends rest on top of my labia and spread the vibrations more instead. Still, as for little extra sensation during sex and a toy that never fails to make my bf harder-than-life, it’s very good. Particularly since it stays in place so well in every position.