Is the Autoblow 2 the best pocket pussy? 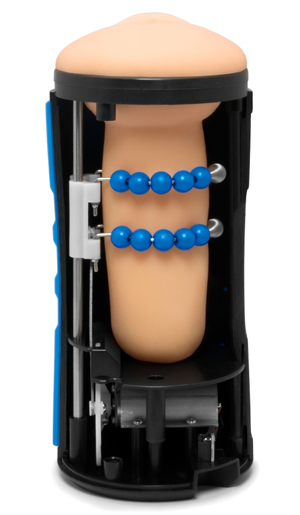 The Autoblow 2 is shaped like someone's oral orifice with a dick-shaped thing connected to it. Basically, you insert your penis into the device's “mouth” and it kinda gets held in the dick-shaped object. Then, you just plug it in and the machine will do its best to plug you in.

The short answer is: It depends. It depends on whether you can get off on someone just stroking your dick or you need some other method to truly finish off.

For Sunderland, the machine gave good head, but he also wanted it to function as an “ass machine” as that is how he comes. In conclusion, “Sex with the Autoblow 2 was as messy as gay sex, but without the fun of screwing an asshole.”

Then again, that was Sunderland's experience, and maybe you're the type who can get off on having a device noisily sucking on your dick. You see, when Brian Sloan, the inventor of the Autoblow 2, conceptualized his now popular device, he meant for it to be “an electrical appliance that makes your penis feel really good in a realistic way.” He wanted it to give “men a sensation close to that of a real life sex encounter.” Because truly, when you are getting head, you don't hold your dick, right? You let the other person do that for you and you just sit back and receive.

Men may be happy with an artificial vagina or fake mouth style toys because they are better than using your own hands. The sensation men get from using popular male toys is definitely a step better than their hands, but those kinds of toys still require men to hold on to the device, then move it up and down vigorously. In other words, the feeling of a real sexual act isn't replicated accurately.

With the Autoblow 2, men have a device that comes a lot closer to replicating a sexual act with another person because all you have to do is plug it in and it does what you want it to do.

<<< How to Clean Your Pocket Pussy?
What are fake pussies made of? >>>