Home > Other Fake Pussies > The Groomin Mild Touch by Kuudom 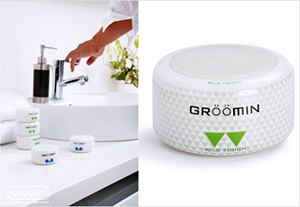 At first, I had mistaken the Groomin Mild Touch for a new Tenga product. To me, it seemed a lot like a squashed Tenga Egg. I was wrong, though. This little textured cheap fake pussy is from a manufacturer called Kuudöm.

I received this item from J-List in a pretty compact box, carefully packed with the rest of the goodies I had bought, cradled by crumpled Japanese newspaper. Their packing department must play Tetris a lot. They waste absolutely no space, which means cheaper postage for shipping.

This cheap fake pussy was designed to look like an inconspicuous jar of hair gel. It's fairly discreet, so long as the person that looks at it doesn't read a lick of Japanese. The worst that it says is “mild touch” which could be easily be confused as some Engrish having to do with hair care, since most people will probably associate Groomin with grooming. Of course, they may wonder about the “Ages 20 & up” thing on the back…

You'll need to first remove the silver and blue foil sticker. Unfortunately, I didn't take enough Japanese to read all of the kanji, but most of the sentences on the back of the silver/blue sticker end with "de kudasai", so I think it's safe to assume that it's a bunch of instructions and/or safety precautions. The shrink wrap jar wrapper has some information about the manufacturer, and says that the product is intended for those "Ages 20 & up". To remove the wrapper, just peel down the perforated strip. Although there is a recycling symbol on the wrapper, there is no number to help sort it. You'll find the sleeve folded over itself, displaying the texture pattern, and a pod of lube within the jar. Below is a video from the manufacturer, which displays the packaging and explains how to use the toy. Although it's in Japanese, it's pretty easy to understand.

I've tried my hardest to research the Ecolast material and get ahold of the manufacturer to speak more about its makeup, but I haven't had much luck. I was contacted by someone from the company, but I was basically told what the above image says about the material, and that they would get together an ingredient list for the lubricant, which I'm still waiting on.

Basically, the material is flexible, odorless, tasteless, harmless to humans and then there are some phrases on the site that don't make any sense to me such as “composition mixture to fall environmental burden” and “anti oil ooze out”. So… Does that mean it's eco-friendly and maybe biodegradable? And I guess it doesn't leech chemicals into your system or the environment? I have no idea what those phrases are supposed to mean…

I can definitely vouch for it not having any smell or taste. Upon removing it for the first time from the jar, though, there was some sort of powder on it. I assume it was just cornstarch to prevent the material from becoming tacky, but I decided it best to wash it off with a pH-balanced wash that I use for cleaning my menstrual cup before letting my husband use it. The material is quite squishy and very stretchy, meaning it should stretch to fit almost any penis size.

Given that I do not know the exact makeup of this material and can't say that it is nonporous, I would not share this toy with a partner. I wouldn't expect this material to hold up after more than a handful of uses either. Also, please do not use this as a condom.

Due to the fact that I've been unable to determine the composition of the Ecolast material, I would suggest to use exclusively water-based lubricants with this cheap fake pussy.

Groomin Mild Touch Lube PodWhen you open the jar, you'll find a little opaque white pod sealed with a blue piece off peel-off foil. As stated earlier, I was told I would be sent a list of ingredients for the lubricant, but I have yet to see anything in my inbox. I will be sure to update, whenever I receive a response. The foil on the pod says "Mild Lasting - water-base lubricant - original formula for ecolast".

This lubricant is completely clear and odorless, but not tasteless. The taste is like an artificial sweetness that bites at my tongue. I had my husband try it, and he said it tastes like cough medicine. As for consistency and texture, I would say that this lubricant is a little thicker, but not gel-like (It can be poured, but leaves a decent pool that doesn't run very quickly), and has a very smooth feeling to it. It may sound weird, but it feels like the lubricant provides a slight cushion; it's difficult to explain, unless you feel it for yourself. More than enough lubricant is provided in the pod, although you can't seal it back up.

The above image is what the sleeve looks like when removed from the jar. It's folded over itself to display the texture. To me, it looks sort of like a flower.

After making sure the sleeve was clean before it's first use, and after lubricating the inside, I stretched it over my husband's penis and used it to help with a hand job. (You can see a demonstration of this in the video featured earlier in this review.) It's very stretchy, and will stretch down to the base of his penis with no problem. It definitely leaves the closed end stretched thin, though. After the first use, it developed a rather big bulge in the closed end, which tore after almost four more uses.

"It feels pretty much like the other one. I can't really tell any difference. I wouldn't say that it feels "milder", it's just flicky like the wild touch one. You know, how it was kind of a flicky feeling on my head and around the lip of it, but not really on the shaft? Like that."

When asked to do a blind test, he really couldn't tell the mild touch and wild touch versions apart. So, if you were looking for something milder than the wild touch version (Review of The Groomin Wild Touch by Kuudöm), you're out of luck. At least it completely contains the ejaculate, so it's easy to clean up afterwards.

To make cleanup easier, and to prevent the buildup of bacteria in what I suspect to be a porous material, you could wear a condom. Whatever you choose, if you decide to use the cheap fake pussy again, be sure to wash the sleeve with warm water and a mild soap or toy cleaner. Be sure to let it air dry fully before sealing it back in the jar, or you could end up with quite a stink the next time you open it up to get your sleeve out.

Much like the eggs, these are not made to last a lifetime. Really, they're designed more as one-use cheap fake pussies, but you can stretch their lifetime out for a little longer, depending on how rough you are with them. Don't expect to get more than a handful of uses out of an individual sleeve, though.

Overall, my husband and I do like the Groomin sleeves better. Their textures suit my husband more, and I think the packaging is much more discreet than the eggs. Plus, it's easier to find uses to reuse the jar that it comes in, rather than to find uses for the plastic Easter Egg-ish containers that Tenga Eggs come in. Although I do believe that the Ecolast material is safe, I'm not sure about the lube. I will be continuing to badger the manufacturer until I get some better answers on both of them.

Hi! I'm John, an early 30s living on ten acres in the Midwest.

I only review toys that are body-safe, to the best of my knowledge. If they aren't body-safe, and I'm writing about them for their novelty factor (such as vintage toys), I will make that very clear.

I do my very best to avoid exaggerating a toy's virtues or downplaying its flaws, but as I mentioned above, objectivity in reviewing is impossible due to our unique physiologies and psychologies.