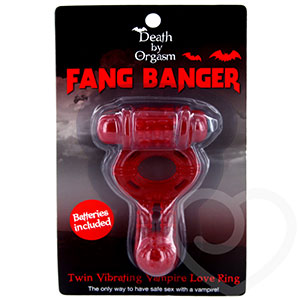 Don’t let the vampire theme fool you into thinking this is only for a certain season or fandom though; it’s truly a cock ring for any couple in any season.

Fang Banger’s main ring looks small at first glance, but it’s made out of a super pliable jelly-like silicone that stretches easily. I didn’t have any trouble getting it on or off, and it was comfortable to wear.

I’m not sure when that’s going to happen since we haven’t managed to wear them out yet, but I know the LR54s are going to be harder to find around here.

My battery beefs aside though, this is a really good cock ring for couples.

Of course I like it, it’s vampire-themed! LOL. Seriously though, I do like it but I did have hopes that the fangs and nubs would be firmer. I wasn’t looking for something to poke the crap out of my clit or anything, but as it is they squish down so easily that I can’t feel any real distinct sensation from them. What I *can* feel is pretty decent though, and while the vibrations aren’t earth-shattering they do feel very nice.