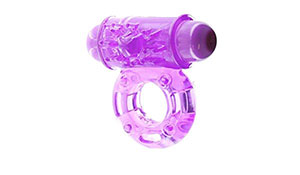 In the midst of all our previously-mentioned chaos, we’ve managed to steal some “shag time” here and there (of course!), and have had a new vibrating cock ring to play with. It’s called the Shag Factory Big Ben, which is neither big nor built for men whose “Bens” are insanely big, but has a lot going for it.

The packaging is useless for storage since you rip the clear plastic front off to get the fake pussy toy out, but it certainly looks groovy with its Austin Powers-like motif. Supposedly you can collect Shag Factory toy wrappers though and turn them in at ShagFactory.com for points to get free goodies, but when we visited the site it didn’t look like they were giving out anything for Big Ben’s wrapper yet. In fact, it didn’t look like most of the site was functioning. Bummer, baby.

The ring is made of odorless silicone, and like most silicone it’s a little grabby as far as the surface goes, but not sticky. If you’ve got a big 70’s style bush growing down below, the toy might tug a few hairs, but otherwise shouldn’t be a problem. The “circle” part is thick and stretchy, but not as much as a lot of these affordable cock rings are. We’re guessing that 1-3/4″ in width is about all you could fit it over without getting some instant psychedelic purple color out of your cock. In contrast, the “sleeve” that the removable bullet vibrator slips into, which is adorned with silicone ticklers, is thin and collapses enough that it can be a challenge to put the bullet back in after you’ve taken it out. A little water-based lube rubbed inside of the sleeve helps.

The package said the batteries would last for 90 minutes, but we’re both pretty sure that we got more time than that out of ours before the toy even started slowing down, which is impressive. Battery replacement is quick and easy (just unscrew the base of the bullet), and we don’t have to crank the cap to the point of breaking for the toy to remain waterproof.

Big Ben is easily cleaned with soap and water, although a little extra attention may be needed to get it perfectly clean. The ticklers are no problem, but there are a few small cutouts around the ring part (presumably to make it more stretchable) that you do have to poke a finger through to make sure all the juices/lube are out of. All in all that’s no big deal though and it’s a great toy for the price.

I like it. For one thing, it’s tight, and the longer I use cock rings the more I like a little extra squeeze. Newbies need not panic though because it’s far from being uncomfortable; it just has GRIP. It’s also one of the few rings that we have that vibrates my whole package while I’m wearing it, which everyone knows I like. Whereas the last cock ring we reviewed was more for her benefit, this one is right up my alley.

I don’t really notice the nub or the ticklers all that much, just a wide intense tingling from labia to labia. It’s definitely better suited for women who don’t need direct pinpoint clitoral stimulation to get off (unlike me), but it still feels good. The vibrations are strong enough that I do get some clit joy out of it, plus there’s that whole vibrating dick thing going on that does make things more interesting!