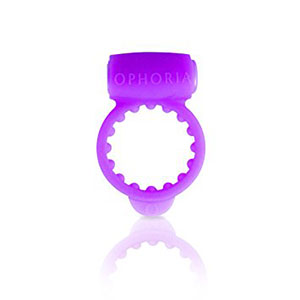 Vibrating cock rings are something that my gf and I rarely turn down the chance to review, because in general they’re one of the best couples’ toys invented.

Once in hand, my first impression was that it’s sturdier than what I expected from looking at its photo. The silicone is pliable, not flimsy, and fairly firm overall. It’s stretchy to an extent, but not enough that I could put it on easily while I was soft; once hard it was no problem though.

The V-ring gripped tight enough to start “enhancing” my erection almost immediately. It turned the “hard” into “rock hard” and definitely made it chubbier. The ring was comfortable overall and I could feel the nubs inside it somewhat, though they didn’t really seem to add any extra sensation.

We started out with the vibrating unit facing downwards toward my balls because the gf wanted to go down on me for a minute, and then switched it upright before she mounted me. That’s when I started to think that those nubs were actually meant to hold the ring in place, because it took a bit of work to twist it around. And we had NO problem with the V-ring shifting up my shaft or slipping to the side during use.

I really like the vibration level, because I could feel them all around the ring but it wasn’t overwhelming. And this thing is quiet; nothing more than a hum, really.

So would I recommend the Ophoria V-ring? Yes. It’s made of one of the safest sex toy materials on the market, stays in place, feels good, and can barely be heard. Oh! And when you go to clean it, you can use plain soap and water for quick washings, or remove the bullet and either boil or bleach the silicone for serious sanitizing. What’s not to like?

To be honest, I decided to do a match test on this pocket pussy to see if it was real silicone before we even used it. Silicone toys are usually a little pricey, so with the 6 button cell batteries included (which are expensive where we live), I couldn’t believe they were selling it for only $14.00. I mean, we’ve paid that much for cheap disposable cock rings before, which this is NOT. But after the V-ring’s pull tab endured nearly 2 minutes of full-on flame without anything bad happening, I was convinced that this toy was simply a very good deal.

On the other hand, I *love* how hard this ring makes my man, and the fact that he’s comfortable wearing it. If Ophoria would make those nubs just a little bit longer (or the vibes a bit stronger) I’d give it 5 stars, but for now it gets 4.