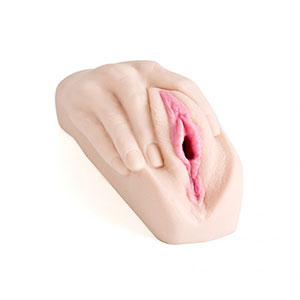 What makes it a cut above the rest?

Homage to the real thing

Adds real to the realistic

As it was molded after Lela's aroused and excited muff, this particular artificial vagina is designed with engorged tissues that make humping and bumping really exciting. It practically takes you back to the first time you tried how your sausage would fit with a taco or bun, and realized that anything nice and tight will do, no matter the flavor.

Unlike other realistic vaginas, it has the added feature of Lela's hand and fingers for that extra stimulation. Visually, it is pretty arousing, but it is always that small hole that does me in, weakening everything else but my wanker.

Tight and silky is the name of the game

Lela Star's Creampuff Muff is tight and silky just the way you like it. Most guys want it tight, but the real thing sometimes fail to deliver, which makes this particular fake vagina a real standout and not because I can use it standing up. As penis sleeves go, this one takes the top prize on being wet and silky, which had me wondering if the real thing feels just as good. Given that actual twats can dry out and lose their grip, I'm definitely leaning towards making Lela Star’s Creampuff Muff my favorite vagina sex toy.

This baby, however, is not exactly the pocket vagina that you want it to be. It is not as discreet as can be, and is bigger in size than its counterparts. Of course, with the puffed muff, soft mound and fingers that show you where to slide your shaft, it would not have been possible to make it small enough to fit your pocket. On the upside, it can accommodate bigger-sized men, wrapping them snuggly in one single entry.

As it is made pussy-side up, it can be enjoyed in many ways. Missionary position, cowgirl, lying down, standing up, sitting down and a host of other positions that your imagination can handle.