How many types of pocket pussies are there?

Home > Frequently Asked Questions > How many types of pocket pussies are there? 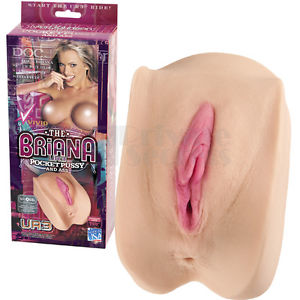 Just like there are various materials used in the development of pocket pussies, so are the types. Men are pleasured in various ways – some like to have their dick sucked while others love the feeling of being the dominant one and doing all the action. On that note, here are some of the most common types of pocket pussies available:

Vibrating pocket pussies resemble vaginas but have an added feature of being able to vibrate. Usually, the vibrating function is achieved through a vibrating bullet which is inserted into a hole at the bottom or at the end of the sleeve. Vibration levels also vary and can be controlled with functions such as pulsating, surging, rotating, multi-speed and so much more.

The vibrating bullets are controlled by a panel connected by a wire. Some vibrating artificial vaginas have a designed effect, meaning they can replicate the role of a penis pump where the user has to squeeze a bulb.

There are various examples of a vibrating pussy sex toy, and one of them is the Blonde Vibe Pocket Pussy which is one of the softest ones in the market. It's also a great product for those who are a bit short on budget but need some loving. With this toy, you just slip the vibrating bullet into the end of the love tunnel then enjoy the pleasures that travel through the material for your pleasure.

Some vibrating products aren't just shaped like fake pussies – some are shaped like an ass. Take the Alexis Amore true to life female replica where you can insert your hard on in either her vagina or her anus. It's up to you.

Some products like those created by Tenga are suction-like toys. When you have the case of the Hornies but with no one around to satisfy that lust, you can always do a cup – so to speak. While having sex with a cup isn't always the sexcapade you want to tell your friends, when you need to unload, you just have to do it.

A review on Vice even called the plastic suction cup from Tenga feeling “better than my girl's own bonerable treasure trove.”

Basically, it works by doing the Tenga and massaging a blowhole located up to to create suction then release it. The effect is the same as the popping sound you hear when someone takes their lips off your dick before devouring it again.

There are machines like the Autoblow 2 that function as stroking devices. In fact, the sole purpose of the Autoblow is to be the original massage chair for your penis. The machine was designed so that men no longer needed to work so hard for self pleasure. With the Autoblow, you just plug it in, plug yourself in, sit back and enjoy the beauty of having a machine pleasure your dick.

<<< Are artificial pussies safe?
Is the realistic pussy better than a woman? >>>