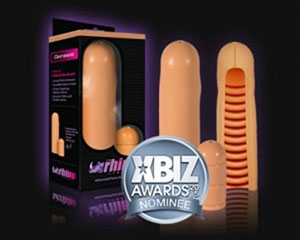 I’ve seen a lot of horrid cock extensions made from crap materials (jelly extensions… blegh.) and the Rhino seemed a bit different.

What Is The Rhino By Traz?

And also as a masturbator sleeve. The folks at Traz seem to have really put some thought into a product that can be used multiple ways, and I was excited to get to try it.

What Are The Rhino Series Cock Extensions Made Of?

Each Rhino by Traz actually has 3 parts; the actual extension, the size core (you slip it inside to make the whole length firm) and a little plug that goes in the head.

All of the pieces are made of pure platinum cure silicone, which really rocks…

To take care of the Traz Rhino series of cock extensions, all you’ve got to do is clean them regularly. Acceptable cleaning methods are the usual for silicone sex toys; you can use soap and water, a ten percent bleach solution, sex toy cleaner, throw it on the top rack of the dishwasher, or boil the whole setup.

Lube compatibility is also the same for silicone sex toys, but I’d change what lubes you use based on where you intend to insert the Rhino… No oil based lubes in the vagina, and I wouldn’t use silicone based lubes on the Rhino without spot testing (the size core would be a good place to spot test).

Storing the Traz Rhino cock extensions is also a breeze. Once it’s clean and dry, just put the parts together and toss it where you store any other sex toys… there shouldn’t be any reaction at all.

How Big Is The Rhino By Traz?

There are actually 3 different size Rhinos: the Genesis, The Rhino Sleek, and the Rhino Stampede. As you may have guessed, the Genesis is Traz’s original model and comes in at 8" long with a 2 inch diameter (girth) with nothing inside it. Thicker folks may be able to get a bit of a stretch (not much at all) out of the material. The Rhino Sleek comes in at 8" long and 1.5 inches in diameter. It’s perfect for guys that are a bit on the slimmer side of things but want some extra length to work with. The Stampede comes in at a rather large 8 inches long with a whopping 2.2 inch diameter, which is great for guys looking for both girth and the extra length provided by Traz’s products.

My Experience With The Rhino Genesis By Traz

Now... When the Rhino Genesis showed up I was pretty fucking excited. Most new toys get tossed on my bed and opened at the end of the day before bed so I can look at them and check them out, but the Rhino was calling for me. I was excited to check it out, so I tore it open and read the instructions (pretty simple stuff: lube the size core, push it in, get a hard on, push it in, squeeze any extra air out, and push the little plug in the head) and thought dirty thoughts until I had a nice hard on.

I slipped the size core in and then finished getting it “on” my body and then just let go… It’s really pretty amazing, in that it stays on. It’s heavy and pulled my cock down substantially, but it stayed on. I grabbed it and I tugged pretty hard, and it stayed put. The Rhino does a damn good job of staying on, and I’m very pleased with this aspect of it.

The next night, I gave it a shot without the end plug and WOW. It’s not as nice feeling as a Tenga or Fleshlight product, but damn… The ridges inside are just right to rub over the ridge of my cock head, and being able to hold a finger over the hole in the head for moments of suction rocked!

Finally, I had sex with the Rhino Genesis on. My play partner for this particular test (thank goodness I found one, this would be incomplete without an actual sex test!) was very ready to give it a shot, but it took some serious work… She hadn’t ever taken anything quite as thick as the Rhino, but with some lube and lots of patience we were going about our business in no time. The Rhino, for me, is an absolute awesome device for the simple fact that it gives me the extra length I need to pull a few positions off easier. Positions that before I couldn’t quite get the momentum to get really rocking and rolling were suddenly no problem at all and best of all… The grooves inside the Rhino still transfer a LOT of sensation to the wearer. The subtle ridge of the head was a bit too much for my play partner and we ended up pulling it off to finish, but in general, the Rhino is a great little device for guys needing an extra bit to work with.

Overall Experience With The Rhino Genesis By Traz

THE RHINO GENESIS BY TRAZ QUITE FRANKLY FUCKING ROCKS.

I’m incredibly happy to say that the Traz Rhino Genesis rocked my socks. As a pocket vagina it was great, as a penis extension it was absolutely wonderful (only one I’ve ever tried, but I’ve heard horror stories), and it’s made of pure silicone. At $70 direct from Traz, I can’t recommend it enough for those that are happy with their penis but occasionally want a bit more to make different positions more fulfilling.