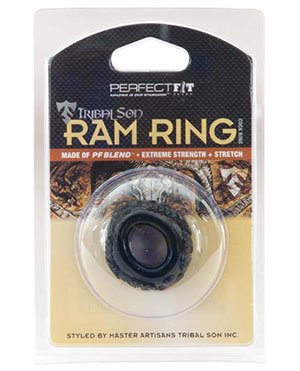 If there’s one thing that sucks about being a sex toy reviewer, it’s encountering that rare toy that doesn’t work out for you in any way at all. It’s not always easy to tell if it’s you, the toy, or if Mercury is in retrograde and it’s just not your fuckin day, but it isn’t pleasant to write about. That’s the case with the toy we’re writing about today; the Perfect Fit Ram Ring.

Out of the box it gave a good impression, being packaged in one of those thick plastic clamshell doo-dads that doesn’t take scissors to open. Those always make for a good storage option. The paper insert that provided the toy’s backdrop was rather classy with its ram skull graphics and earthy coloring, like something you’d expect to see hunting accessories packaged in. Yeah, this is Man Stuff.

The ring itself has that same bad-assed ram skull design molded around the outside, and it’s thick enough to be durable over time. The thumb-sized opening looked impossible at first, but we had no trouble stretching it out to about a 2" width, which is more than enough for most men to be able to slip the ring in place whether they are hard or soft. Once in place, the wider band (about 3/4") and rounded edges made this one of the most comfortable rings a man could hope for, providing just enough squeeze to “enhance” a hard-on without cutting into flesh.

Things were getting hot and heavy and we were all set to have an orgasmic good time with it, when… ouuch. Something with the material didn’t agree.

It’s made of “PF Blend,” which is listed as being a mixture of silicone and thermoplastic rubber (TPR). It doesn’t smell like anything, is grabby but not sticky, and has one heckuva lot of stretch to it. Overall it’s pretty standard stuff, but for some reason it caused a nice little burning dick rash here. Twice. Naturally this behooved us to write to the manufacturer to question the material, and they were courteous and prompt:

“We are sorry to hear that you are having problems with the Ram Ring. We can guarantee that there is no latex in the ring and it meets EN71-3 Standards. This is actually the first we have heard of someone having a reaction to the product. We can’t think of what it might be except that he might have a slight allergy to silicone?”

Ok, well, we’re on the fence about this and trying hard to walk that fine line between opinion and objectivity here. EN71-3 is a European standard set for the safety of the materials used in children’s toys, or more specifically the migration of certain elements from the toys. In other words, it’s not leaching anything unsafe, and apparently we’re the first ones to have an issue with this ring. With that in mind, we’re just going to throw out a couple of facts that would be relevant to everyone else:

1. The ring is compatible with both silicone and water based lubricants, which we did verify ourselves using 4 water based and 3 silicone lubes. We haven’t encountered a silicone fake pussy that wasn’t marred by low-end sil lubes before, so that was interesting. Do not use oils.

2. This product is NOT compatible with latex products. Hear that, condom users? You’ll need to grab some polyurethane or lambskin wraps to play with this toy, since the polyisoprene ones are also derived from latex.

Other than that, we can’t tell you much more about it. It seemed like a decent toy overall, but we didn’t get any further in testing it.