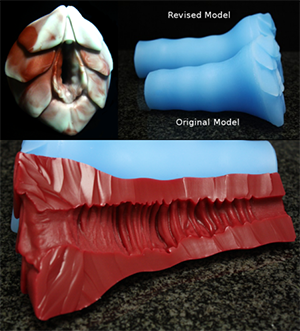 Some of you may be familiar with Janine, the Anthro Dragoness. She’s the mate of Bad Dragon’s mascot, Duke, and has a soft silicone fake vagina modeled after her just loaded with lovely ripples. Well, she got a makeover!

The debut email last week didn’t really say much. So, what’s been changed? Well, things certainly look cleaner, there’s been a change in size and length, and the texture is a bit different now.

As per usual, my package from Bad Dragon was perfectly discreet. There was no mention of the contents or the company name on the outside of the box. The return address is just a name, not the company name.

Inside the box, Janine was sealed in a plastic bag and marked with Made in the USA sticker. This was wrapped in purple tissue paper along with a sample disc, a teenie weenie, a pin, and a pen. Everything was kept safe in plenty of packing peanuts.

You can customize Janine to any color(s) you want. I chose to ask for a minty green/chocolate brown marble. Yep, I asked for Emmie’s colors.

The original is 7 1/2” long, with a sleeve diameter of 1 7/8” and a 6 7/16” circumference. The face length, width, and opening are the same. The original weighs 18.1 oz. This should stretch to accommodate most people. I can fit my entire hand in it with a little lube. That’s not to say that it’s loose, though. No, it squeezes my hand pretty well. I wear a size 4 wedding ring, by the way. So, I’m on the petite side.

All of Bad Dragon’s fake vaginas are made from high-quality silicone. They’re latex-free, phthalates-free, and completely body-safe.

If you wanted to share between partners, this could be sterilized. Just be careful and make sure to thoroughly sterilize it. Cleaning the ridges inside, and even around the labia, can be a bit tricky.

It feels similar to a soft (3), but definitely isn’t as firm. If soft (3) is close to a gummy bear, then I’d say female firmness (2) is close to Jell-O. To my husband, this falls in the Goldilocks zone. It’s not too soft or too hard. It’s just the right softness to provide good stimulation from the from the ridges without becoming too abrasive during extended sessions.

Obviously, the photo is from BD. There was no way I was going to slice both of my Janines. The shorter one is the original, and the longer one is the revised Janine.

I’ve stuck my hand/fingers in both of these and they do feel a little different. The revised Janine feels like the ridges at the beginning are a little smaller, tighter, and slightly more pronounced. Even just using my finger, the revised version feels better to me. The original feels smoother and like it has larger ridges.

Although they may look pretty similar in the photos, if you really look close, you can see what I mean. You have to really look close, though. When I looked at these after feeling around, they kind of confused me and made me think maybe I was just making up the differences in my head…

As you can see, the area behind the face is now more plush and rounded. Also, it looks like they’re getting better at seaming. The seam on my new Janine looks cleaner than the seam on the original.

The face of the revised Janine is much the same as the original. However, the scales have been smoothed of their printer texture, and the clitoris is more rounded. There’s a little bit of texture at the vaginal opening, but it’s not something my husband has noticed much.

If you have big hands, good. You’re going to need them. The shaft of the fake vagina is now thicker than that of the original, making it even more to hold onto. Plus, the little bit of rough texture on the outside of the original has been smoothed out on the revised version. Make sure your hand (or hands) that will be gripping this has no lube on it.

Slip a condom over the end first, to prevent any mess.

Turn a sock inside out and slip it over the end to get a better grip.

Sandwich it between a mattress and your box springs or between couch cushions and have your way with it.

Strategically place cock rings or rubber bands along the shaft to tighten the vaginal canal and produce different sensations.

Cover the hole at the end for more suction.

For the most part, my husband prefers me to use this one him. He rarely goes solo and prefers for me to do the work. With my little hands, this is fairly tricky. What I ended up doing is holding each point of the football-shaped face face with my pinky and ring fingers, while the rest of my fingers steady the shaft. Yeah, I’ve slipped a few times… That’s why I suggest using a sock over it. That makes it much easier for me.

With the original Janine, there’s a chance to get my tongue down in there, too. However, the shaft of the revised fake vagina is too long for me to do that.

The ridges of the revised Janine feel much better to my husband than those of the original. According to him, the ridges in the revised version are more easily felt all the way around, whereas the ridges of the original are felt mainly on the frenulum side of his shaft. Both are equally tight to him, though it seems to me like the revised version is a better fit for him. I’m just going off of how it feels to slip him into each and how the resistance is, though. No first hand experience for me, although I wouldn’t mind it.

This is just fine for a quickie or even an extended session. He’s had issues with other fake vaginas getting a bit abrasive after too long into a session, but this one is fine for him. It’s great for long or short strokes and has a decent suction, which you can play with by covering the hole at the end.

Using Janine Vaginally with a Partner

Although I’m able to get the original Janine into my vagina with some effort, the new Janine’s blunt shaft is just too thick for me to insert and accommodate my husband at the same time. Nope, no turning into a were-dragoness with this one, at least for me.

Shafts of Janine, the Anthro Dragoness

If you can manage to take it, though, like I can with the original, it can make for a great session for both. It pretty much doubles the thickness of my husband, and then he’s got the texture which is made tighter by being inside me. Of course, I can only get the original in halfway and the penetration I get is half the sleeve and half him, though. I don’t think I could entirely fit both. Or, at least, I don’t have the patience to take enough time to work up to it.

If you plan on using a 10% bleach solution, make sure you rinse this out well after, or you may end up with bleachy gunk inside.

You could also boil this for 5 minutes, or send it through the dishwasher (sans detergent) for a more thorough sterilization.

Make sure the inside is fully dry before storing. Store this somewhere where it won’t gather hair, dust, or other debris that could stick to its surface. Also, be careful storing this touching other fake vaginas. Sex toys of varying materials can react with each other and cause leeching or damages to the integrity of the material.

I would have like to have seen some texture on the outside of the shaft to help with grip, and maybe even provide some stimulation to those who could insert this in themselves for their partner to penetrate. I think that’s pretty much the only gripe between my husband and myself for this sleeve.

The original will cease to be for sale soon, and only the revised one will be for sale. If you still want the original fake vagina, you may be able to catch one in on Bad Dragon’s Adoptions page, though. After the extinction sale, I saw a few extinct toys pop up in the flops for a couple months after.